'By badger light and lantern's sigh, and lonely flies the vixen's cry...'

The Start of it All

It all began long ago.

[All quotations are from Mum's record of this time.]

At first it was just the three of them starting out their lives together; Mum (Erica), Dad (Mick) and Kismus (normally referred to as 'Kismus-puss'), the cat. A little later, my sister, Wendy, joined them to make it four.

For a while, the four lived on a small wooden boat that was moored on the Grand Union Canal at Hampton Hall Farm, Rickmansworth (Batchworth). The boat was converted from a ship's lifeboat. It was clinker built, with a wooden cabin and an open cockpit. She was 30ft long and cost £180. Her name was the Kathy, but she was also called 'home' - and she was a good home. 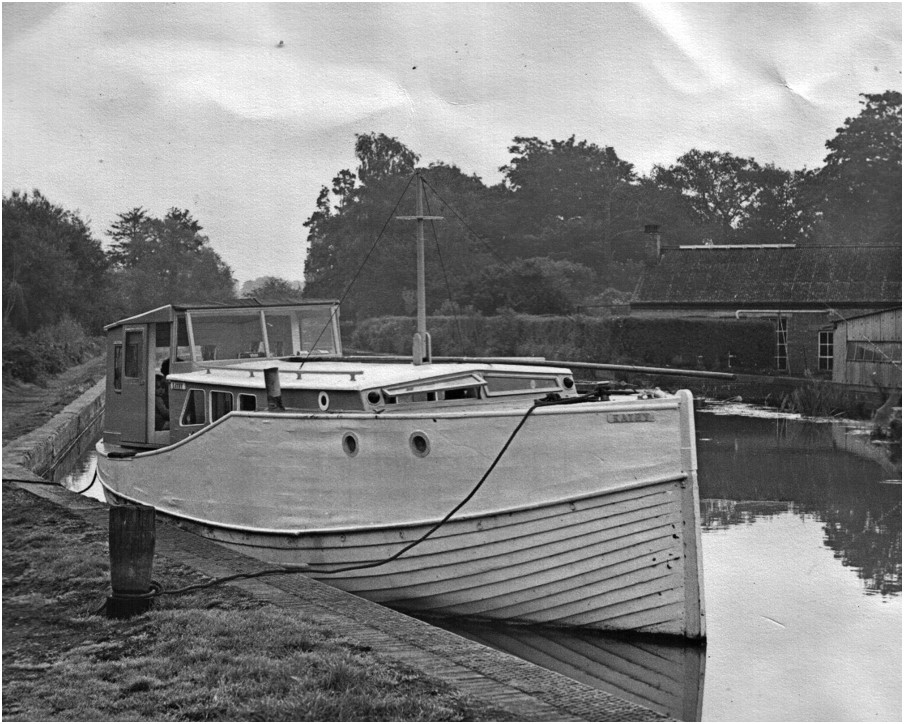 The Kathy tied up just below Rickmansworth (Batchworth) lock on the Grand Union Canal.

"The boat consisted of a large cabin, the greater part with good headroom, but it lowered in the fore part. The converted car engine was also housed in the cabin, but concealed by a wooden cover. The toilet compartment was in the extreme fore end. There was an open cockpit... It seemed that at last we had found our new home. The price, £180 was about right, so we handed over the money and became the proud owners of the Kathy." 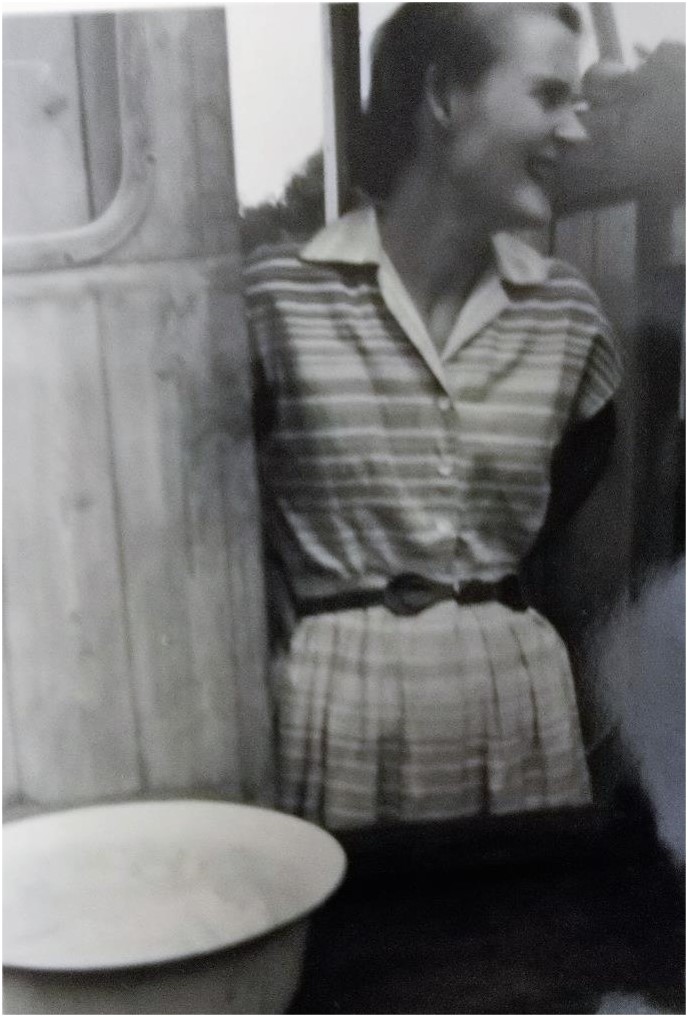 Mum on the Kathy

"We were very snug in the cabin, which was lined with bunks so that we had plenty of sleeping places! Wendy, of course, couldn't have her cot, but we used one side of it against one of the bunks at night to prevent her falling off." 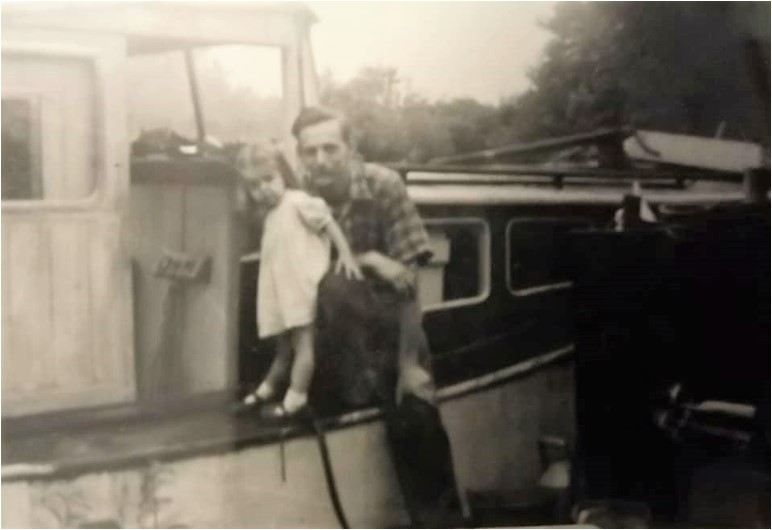 The seasons passed. Rains came and went, so did the ice and the beating sun that shrank the boards to let the crafty rain in.

"One problem we did have to overcome was that after a prolonged dry period the roof boards dried out and contracted leaving gaps, so that with the first heavy shower of rain we tended to have leaks... so there was always a number of utensils ready to put in strategic places at the first sign of rain. But with our lovely little fire sending out its heat we never came to any harm."

During this time plans and preparations were under way to welcome one more soul who would be joining this little family of four and sharing with them their life on the Kathy. Dad who had by now already converted the cockpit into a galley with oven, sink, and draining board, now set to work preparing the cabin before this new life embarked on board. 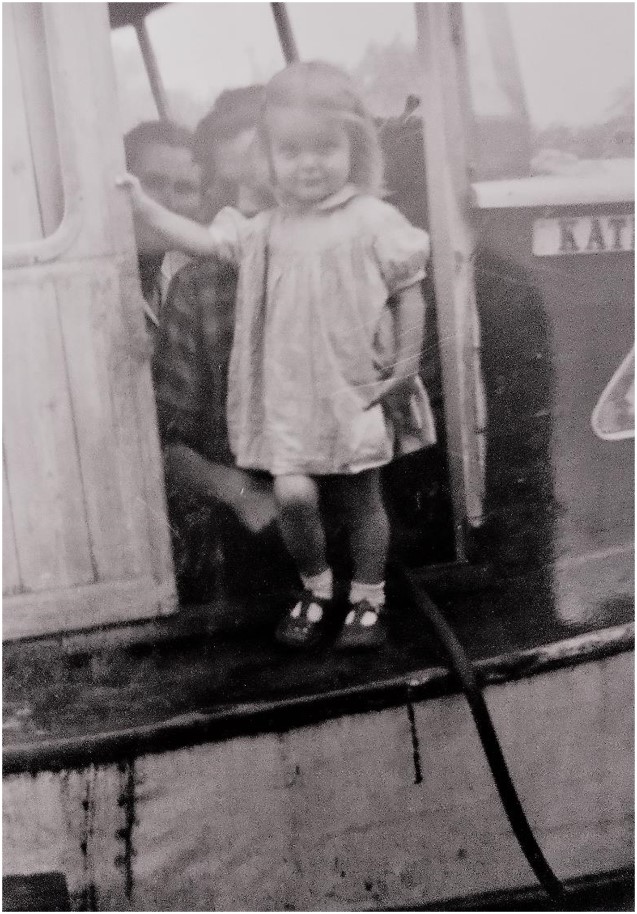 Wendy on the gunnels

"Mick was trying to get as much of the work done in the cabin as possible before the baby arrived. The main part of the cabin had quite a high roof, but towards the fore end it lowered so that there was little headroom. At that point Mick put in a dividing wall, and made that into a small cabin with two bunks, one on top of the other. There was a small porthole each side, giving plenty of light. This was the children's cabin. As soon as it was completed Wendy was able to use it and at long last have a place to herself at night." 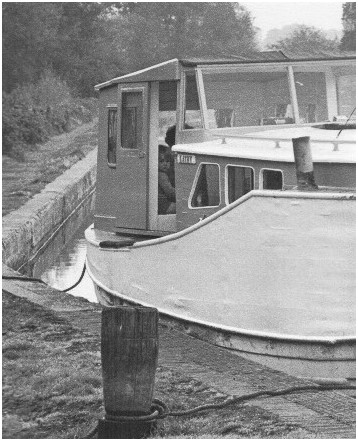 Wendy looking out of the Kathy's cabin

Around that time, the winters were fierce. The land and water became locked hard in ice and snow. The winds wept coldness, piling drifting oceans of snow across the countryside. 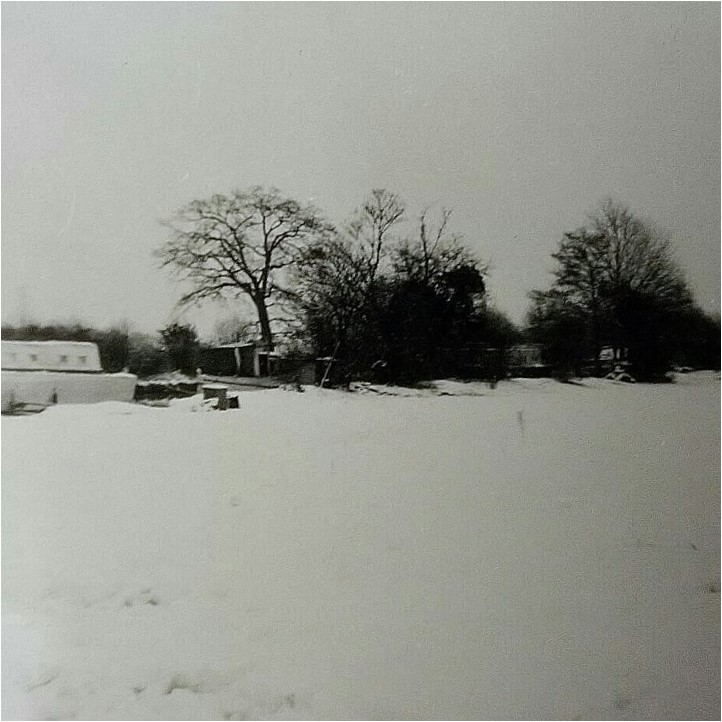 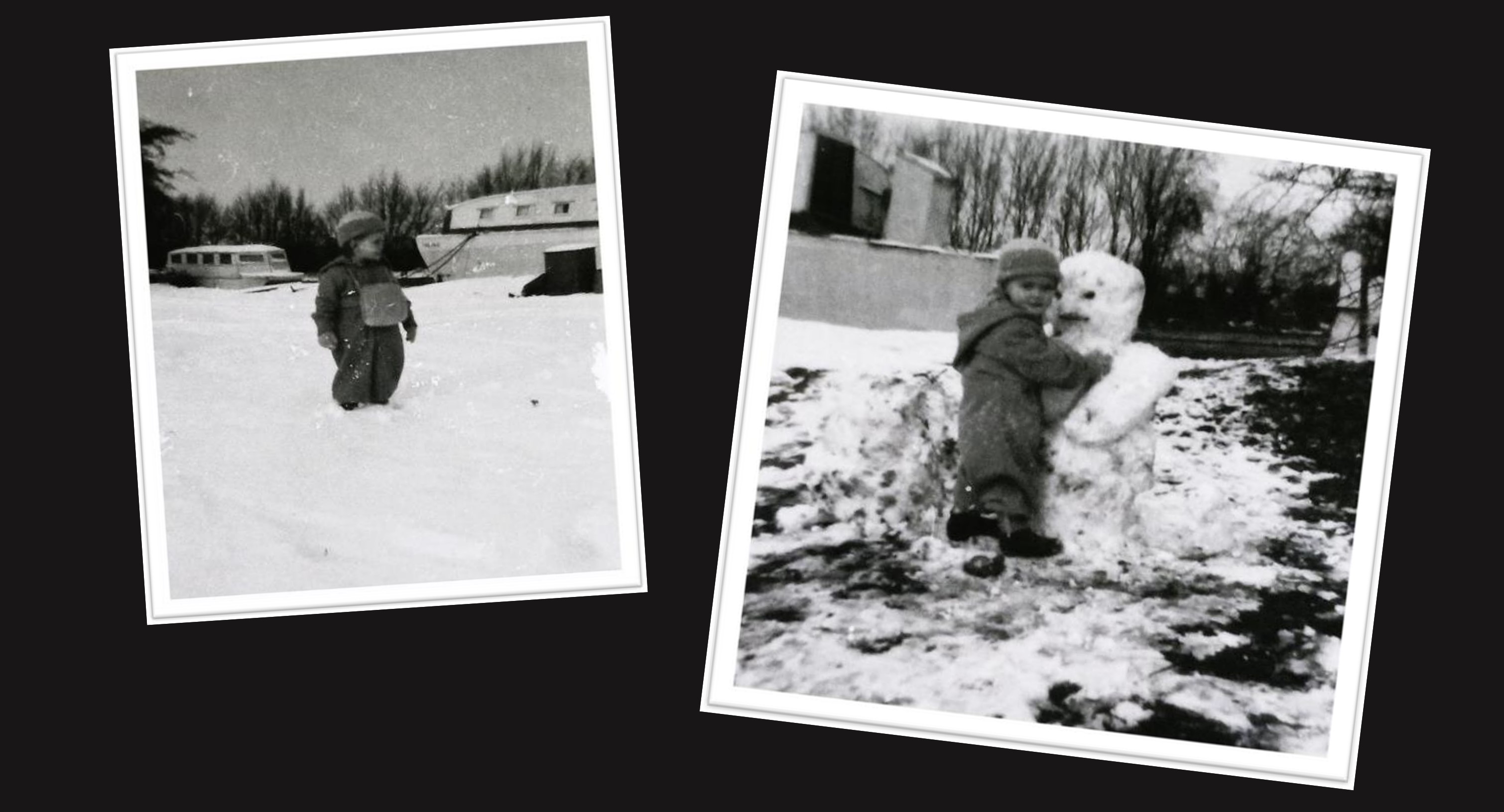 But life on the Kathy with the four of them continued warm and snug.

"When we had our first fall of snow, we really found how snug our boat was compared to a house. There were no draughts and one could get every corner of the boat as warm as toast, in fact almost too warm, so that we were always able to have the little windows open and so get plenty of fresh air." 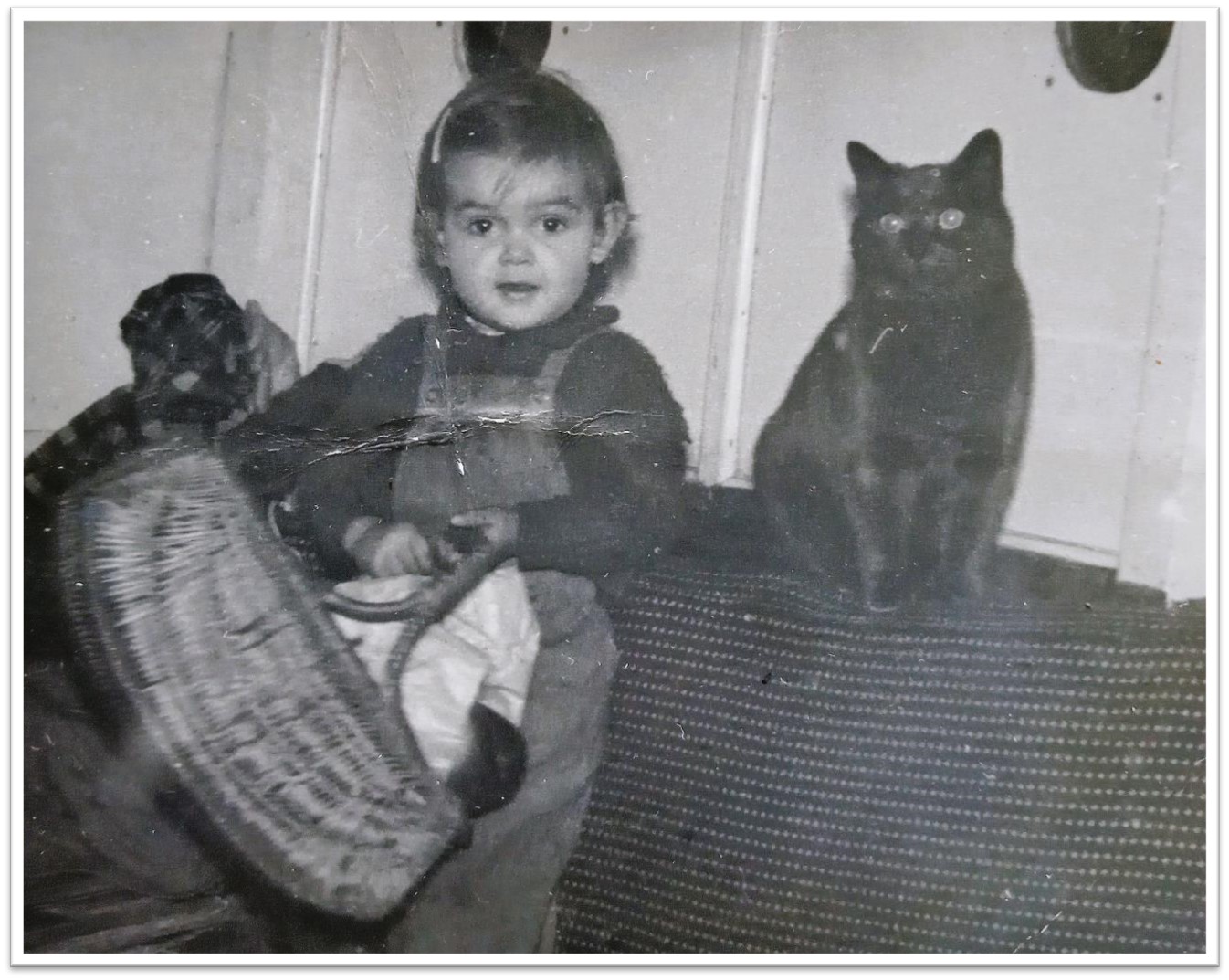 Wendy in the cabin with Kismus overseeing everthing with a regal eye! 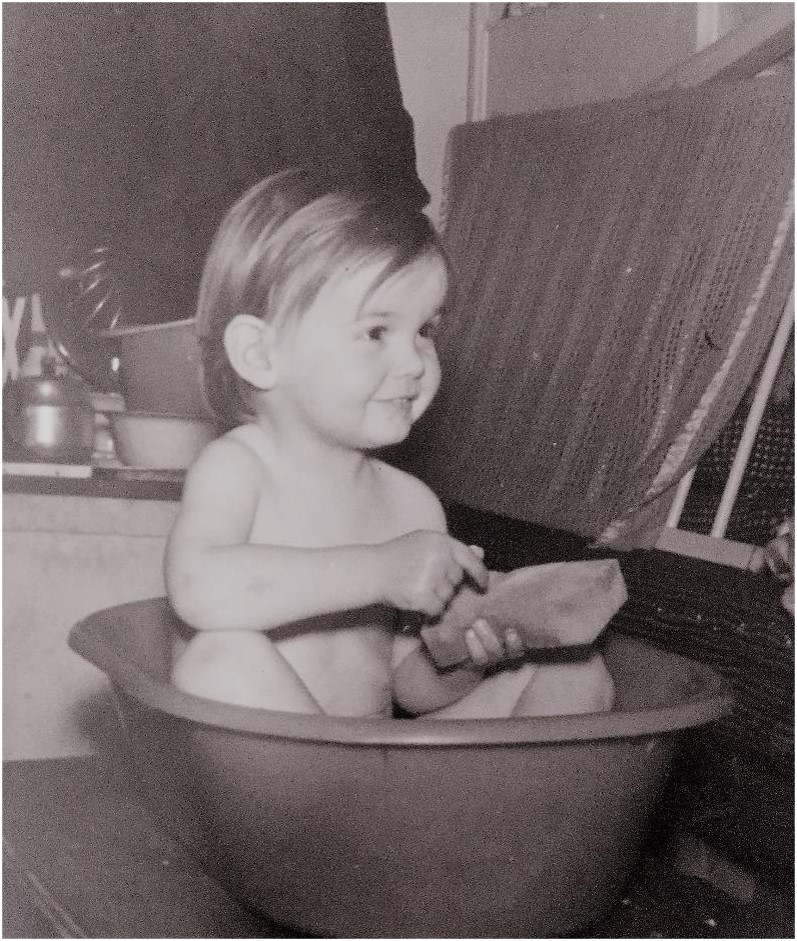 Time never stops or pauses, even though it might feel it does, and a new life was getting impatient to be born and to join this little family of four. At this time, the NHS was still fairly young and hospitals, clinically bright with sterile stainless-steel and starch. Home births, particularly boat births, were strongly discouraged in this brave new world of science, Sputnik, and jet liners. Mum had other ideas.

"About the middle of November the midwife came to see me. I was determined to have the baby on the boat... Fortunately the midwife was quite an adventurous person, who had practiced midwifery all over the world, but one thing she had never done was deliver a baby on a boat, so she was as happy as I was keen to go ahead with the idea."

And then, one day towards the end of April, it turned cooler after an uncustomary warm and dry couple of weeks. Synoptic weather charts show high pressure moving up the country dragging with it frontal systems. No doubt, on that day, some looked at the clouds and grumbled. And life carried on as it had the days before. Engines shunted in sidings. People waited at bus stops. Shop tills rang out. Dogs barked. And, in the cabin of a small boat moored on the bank of the Grand Union, I took my first breath of air; sweet with cow pasture, and nettles, and paraffin. 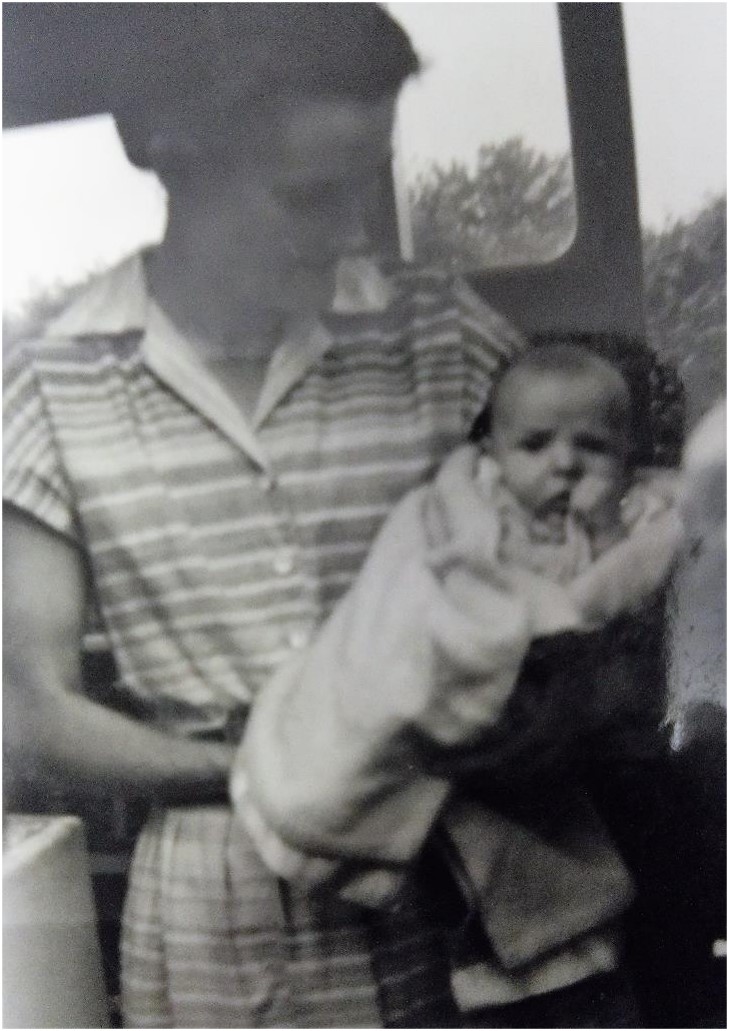 "Fortunately it was not raining during the birth as Mick and Wendy were sitting out on the mooring. As soon as the baby arrived the midwife insisted that Kismus should see him first otherwise she would have her nose out of joint!"

I was born on the dark, green-scented waters of the canal, in a small wooden boat, painted white, which smelt of chick weed, slow moving waters and paraffin. It was lit by hurricane lamps and love, and the rain drummed upon the cabin roof of my first wet spring. Inside there was an anthracite stove that coughed smoke into the sky and coloured counterpanes on the bunks, made from crocheted squares. The world I first knew echoed with brush of rain on water, and the singing sigh of swans’ wings in flight; it was as warm and snug, and as soft as the cat that shared my cot; it smelt of earth and oil and the rustle of reeds; it tasted of malt extract measured on teaspoons. 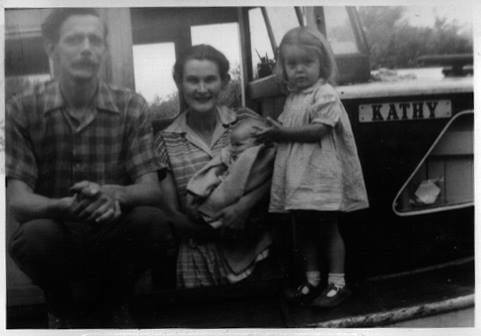 And so, now there were the five of us. 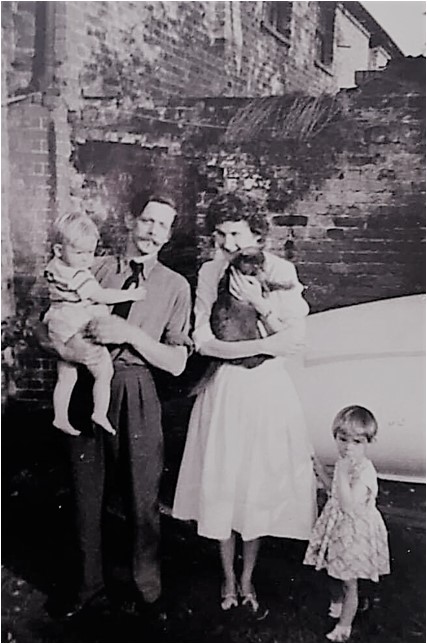 The five of us at Hampton Hall Farm
(From left to right)
Me, Dad, Mum, Kismus, Wendy

Because life could be quite cramped on the boat, I spent a lot of the time tucked into the pram, guardianed royally by a seraphic Kismus, who would share my blankets and sometimes use me as her pillow. And so my life started out cocooned within two small boats, one in water and one on wheels, under stern, crow-towered, cloudscapes of Hertfordshire scented with cowparsley and wet soil. 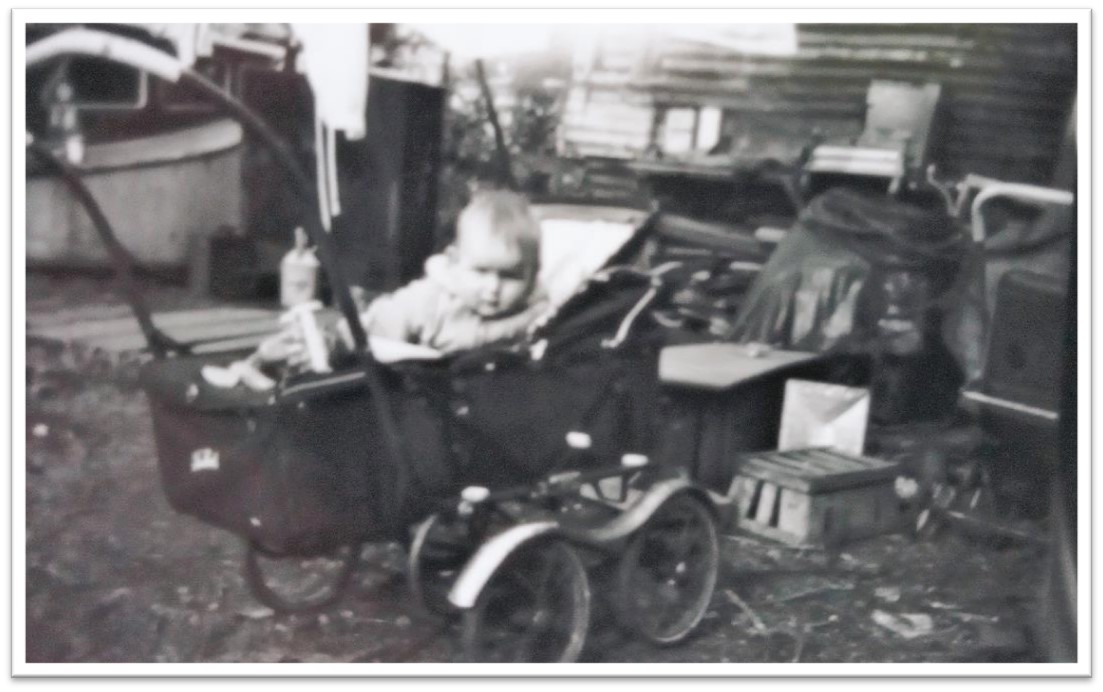 Much later Mum painted a picture of those days she loved so much living on the Kathy at Hampton Hall Farm; first as a family of four and then of five. 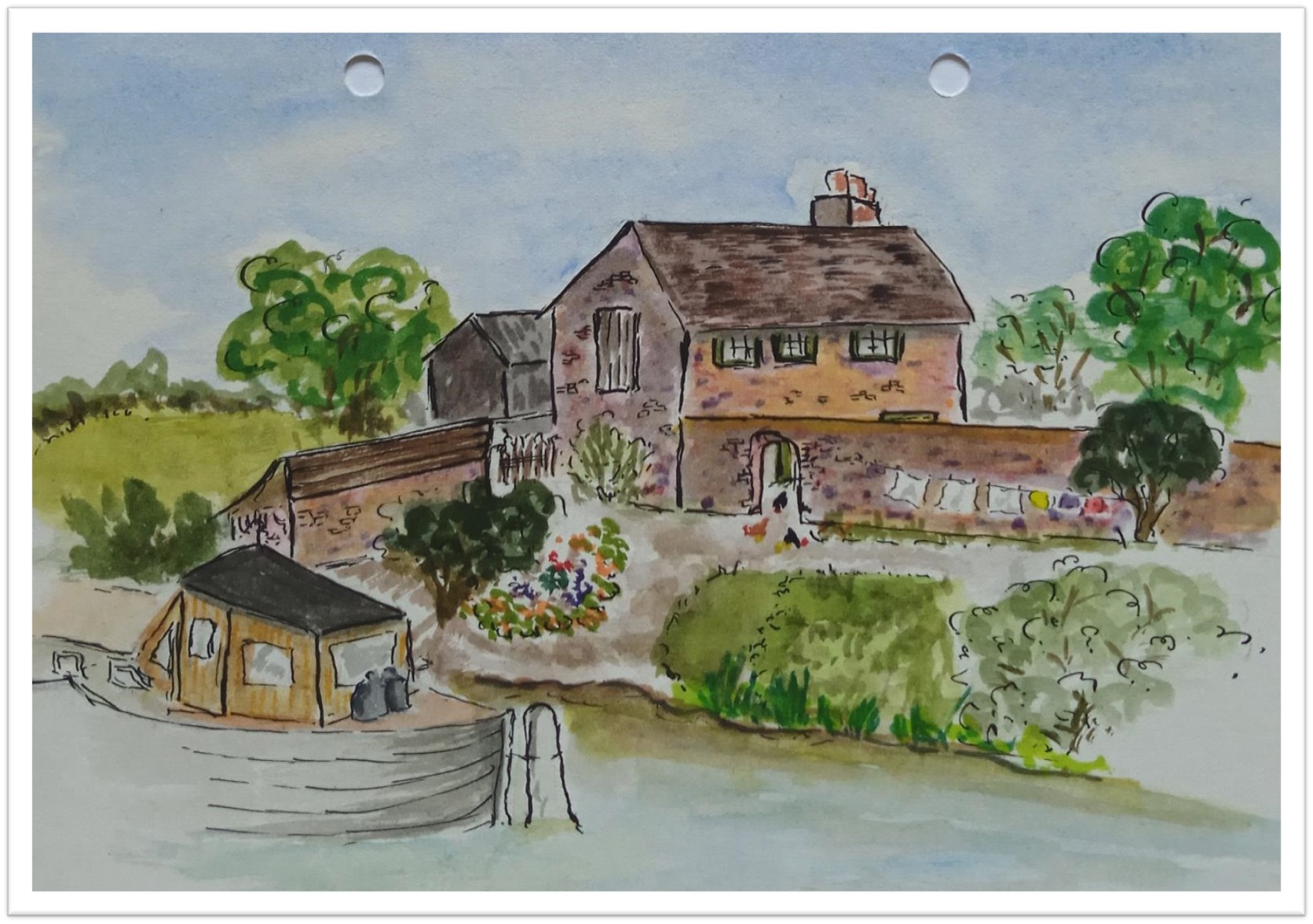 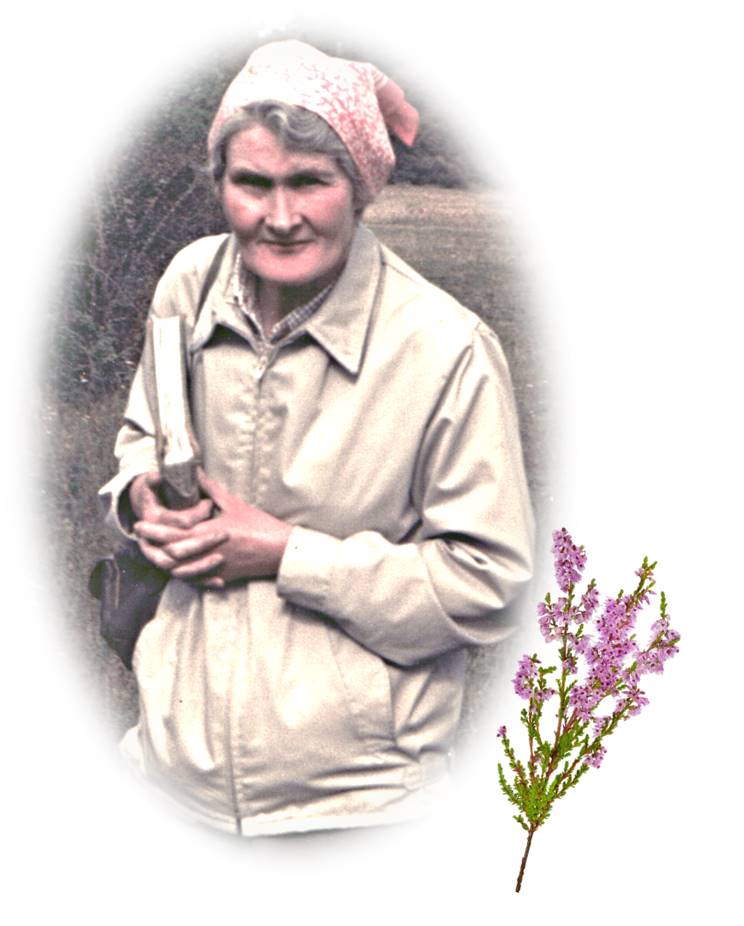 I plan to read all of Mum's writings on this time. However, you can hear excerpts in the following episodes:

You can hear more about my early life on the canal here - Episode 27: A Lifetime Ago.