Nightwalk 2 (Moon shadows across the water)

The night is chill and crisp, a bright moon rides the racing clouds and stars shimmer on the surface of the canal. It’s a perfect night for a night walk. Snuggle down and wrap up warm as you join me on a canal walk washed by moon light. 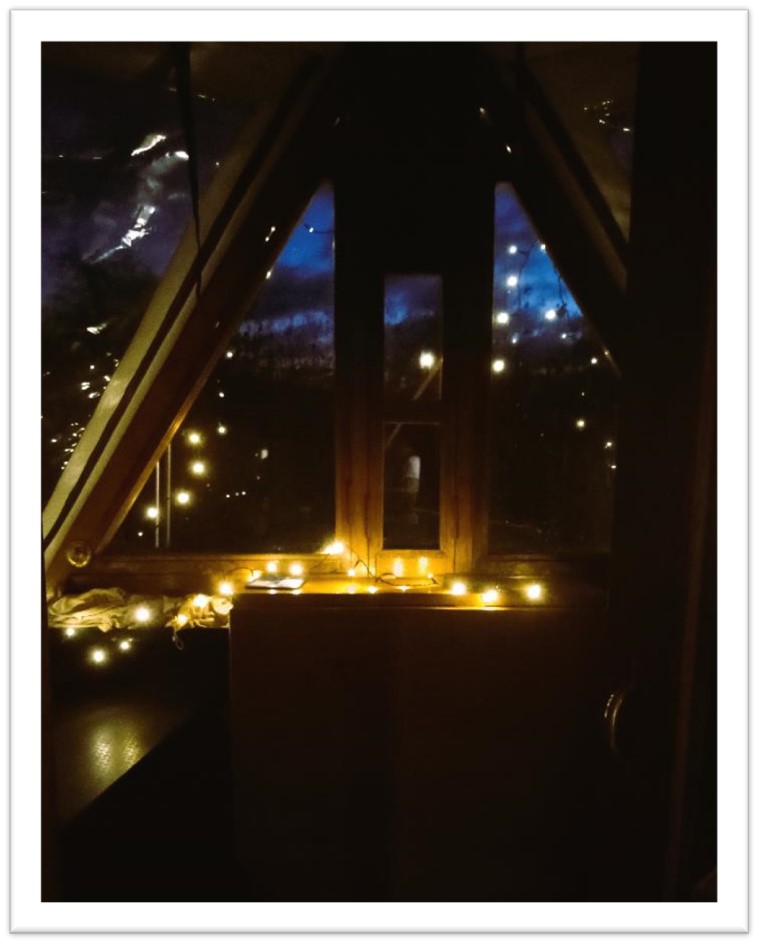 Earlier the night of the walk as darkness fell. Looking out of the bow of the Erica

In this episode I read an extract from Niall Mac Coitir’s retelling of the myth of Halcyone and Ceyx in his (2015) book Ireland’s Birds: Myths, legends and folklore published by Swift Books. The book by Alexander Porteous that I refer to on the walk is The Forest in Folklore and Mythology first published in 1928 and subsequently republished by Courier Corporation (2001).

The first NoSW ‘Nightwalk’ can be heard here: Episode 5: Nightwalk.

For more information about Nighttime on Still Waters

You can find more information and photographs about the podcasts and life aboard the Erica on our website at noswpod.com.

This is NB Erica narrowcasting to you on a magical night, washed in platinum and starshine. Moon shadows cast zebra stripes across the canal and towpath. Tonight, we are afloat among the stars.

The temperature is just above zero, the stove is hot and the kettle has boiled. Thank you for coming. I am so glad you could make it. It's lovely to see you. Come inside out of the cold and welcome aboard.

NEWS FROM THE MOORINGS

Winter’s wolf bite has bitten deep this week, nipping at ears, fingers and noses! December 1st marks the start of meteorological winter and, this year at least, the seasonal cycle has taken it seriously. It has been great and not great, for all the complicated and (I candidly admit) contradictory reasons that lay behind my comments a couple of weeks back about my unease with the mildness of the autumn and early winter.

Around midweek, the wind direction, which had been pretty much south (with some south, south westerly spells) developed a norther-easterly edge to the air, bringing with it a rawness and the first feeling of winter. We’re in a bit of a frost hollow here and so the temperatures are quite often a little below those in neighbouring areas. Mornings and evenings have been softened and shrouded. Wreaths of mist lifted and hung spectrally above the water, so that the moorhens skittered from side to side, as if they were cloud swimming. Water-bound swifts. Fogs unfolded, hanging low in the valleys, following the contours shared by the canal. The reeds and flag leaves, sparkle with cloud dew and the song of first light is muffled in an amber fire of greys tinged with gold. Even the jagged skeletal limbs and branches of trees look softer, wrapped in a nebulous light. The world seems to shrink as the horizon of daylight draw infinitely closer, until I too am wrapped in this tiny, muted landscape – a corridor of towpath, beside a channel of water, leading, in front and behind, to the edges of this small world. I walk as Adam once did, before the naming of the animals, before the touch of Eve. The dripping hedges shiver with movement, and sharp bursts of song. The cocooning warmth of the boat seems very welcoming on dark mornings like these.

This weekend we have been putting up the lights and Christmas decorations. It is usually at this period that the shortness of daylight becomes noticeable and it is good to fill the place with light. Some boats really go to town and are a blaze of colour that set the waters around them afire. It’s nice to see this expression of life as the days grow colder and darker. Inside, we have now put up our tree and dotted lights and festive ornaments around the boat. There’s not so much room as there is in a house and draping streamers and traditional decorations from the ceilings is not an option when that ceiling is already only a couple of inches (if that) above your head! But it is good to mark these times. To recognise the tilt and turn of our globe and the cycles of our lives. There are times when we need light to light our darkness.

However, no matter how bright we can light our boats and our houses, we’d be hard pressed to better the kingfisher. There has been a kingfisher regularly visiting us at the moment. Actually, there may be a pair. I see a male mostly. He is getting more relaxed with our presence, often allowing us to be quite close to him before flitting off – in a flashing of dart of electric blue light. In the dusk of a winter’s gloom, it is not surprising that they were associated with the haunting flickering light of will-o’-the-wisps.

It is fitting that the kingfisher has been so visible to us of late, when the November winds have dropped. Periods of atmospheric quiet between December storms. There was once a widespread belief that it was around St Martin’s Day (Nov 11th) that the kingfisher would lay her eggs. St Martin’s summer – a customary spell of warmer calmer weather, the Halcyon Days. It is because of this that the other common name for the kingfisher is halcyon (ἀλκυών), which, in turn, gives rise to their Latin name alcedo. The gods of the elements, it was understood, were very kind to these beautiful little souls – throwing a veil of protection over them. That such beliefs have bled through western cultures as far north and west as Britain is a testament to the influence of the Greek classical writers.

Niall Mac Coitir notes that they thought that kingfishers migrate to the seas, where in the solstice lull in winter storms that traditionally fell across the Mediterranean Sea (the original Halcyon Days) in the seven days leading up to the winter solstice kingfishers would lay their eggs in vessels hanging over the sea. The eggs would hatch in the following seven days.

Mac Coitir includes the touching story behind these ideas. He writes:

As we leave the moon lit canal behind us, that is a good place to return here. I had planned on recording a bit more, but the memory card of my field-recorder was full, but that just means that we can climb the unnamed hill at another time.

So, this is the narrowboat Erica signing off for what has been a truly magical night and wishing you a very restful, peaceful, and warm night. Good night.