In this second Summer Reading Special we discover the delights of Ernest Temple Thurston’s The Flower of Gloster. 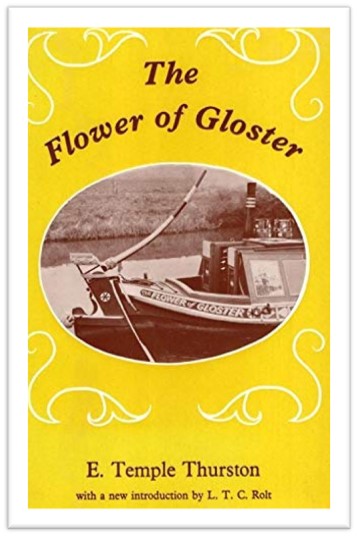 Published in 1911, Temple Thurston is writing about a very different world to the one in which last week’s authors (Hassell and Hollingshead) were writing. It is a nostalgic nod to a world that Temple Thurston recognises is dying. Described by LTC Rolt as unashamedly romantic, it is a lyrical description of his journey aboard the horse boat (pulled by a horse) ‘Flower of Gloster’ from Oxford to Inglesham in the west country. Temple Thurston paints an often idyllic picture of lifeaboard. He is accompanied by the working boatman Eynsham Harry, a quiet contemplative man whose rustic wisdom and ‘hedgerow philosophy’ is the perfect antidote to Temple Thurston’s world weary encounters with academics and business barons of the brave new world of the early 20th century.

The book is also notable for inspiring LTC (Tom) Rolt to renovate an old working boat (‘Chressie’) and live for many months aboard with his newly wed wife cruising up and down the canals of pre-war England. His record of this time in the book Narrow Boat has since become a classic in waterways literature and has often been cited as instrumental in saving the canals and waterways of Britain. Rolt went on to become one of the founders of the Inland Waterways Association and a key player in canal conservation and restoration.

The book has subsequently been republished a number of times and more recently in the form:

Temple Thurston, Ernest (1968) The Flower of Gloster: with introduction by LTC Rolt. London: David and Charles.