The first of our ‘Summer’ readings this year is a litle different from those we looked at last year and features Andy Griffee’s meticulously researched, fast-paced, crime thriller Canal Pushers. 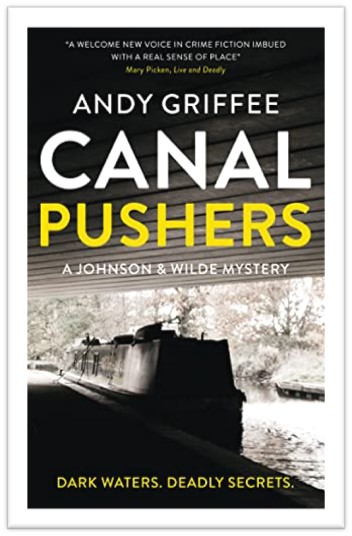 Set on the West Midlands canals from Stratford-upon-Avon up to Birmingham and down to Hanbury (a handy map is included at the front of the book). The detail of the canal systems travelled is beautifully captured as is life aboard a narrowboat for would-be owner Jack Johnson.

I initially started the book with some slight apprehension, being drawn by the canal setting and the rave reviews. However, I was quickly hooked. If crime thrillers are your thing, you are going to love this. If canals and narrowboating are more your thing, I think you will love this too.

“Book 1 in the Johnson & Wilde crime mystery series, featuring ex journalist Jack Johnson, the enigmatic Nina Wilde, and a narrowboat with a top speed of 4 miles per hour…
Jack Johnson is newly divorced, recently made redundant and in search of a fresh start. But when a young boy he meets on the canals turns up drowned, trouble seems determined to follow him. With the encouragement of Jack’s unlikely companion, Nina, who’s come aboard his narrowboat, Jumping Jack Flash, to help him navigate the waterways of the Midlands, Jack is soon tangled up in a police investigation that doesn’t quite add up. Is there a serial killer stalking the towpaths? Jack’s got more pressing problems too: can a canal boat outrun an organised crime syndicate and a media manhunt?”

Andy has subsequently written (to date) two further adventures featuring Jack, Nina and Eddie (the border terrier); River Rats (set on the Kennet and Avon) and Oxford Blues (based around the Thames at Oxford).

More information about Andy can be found on his website: Andy Griffee.

You can follow Andy on Twitter @AndyGriffee to find many pictures of the real-life Eddie the border terrier!

More information on all the Jack Johnson and Nina Wilde mysteries can be found by going to the Orphans Publishing website.